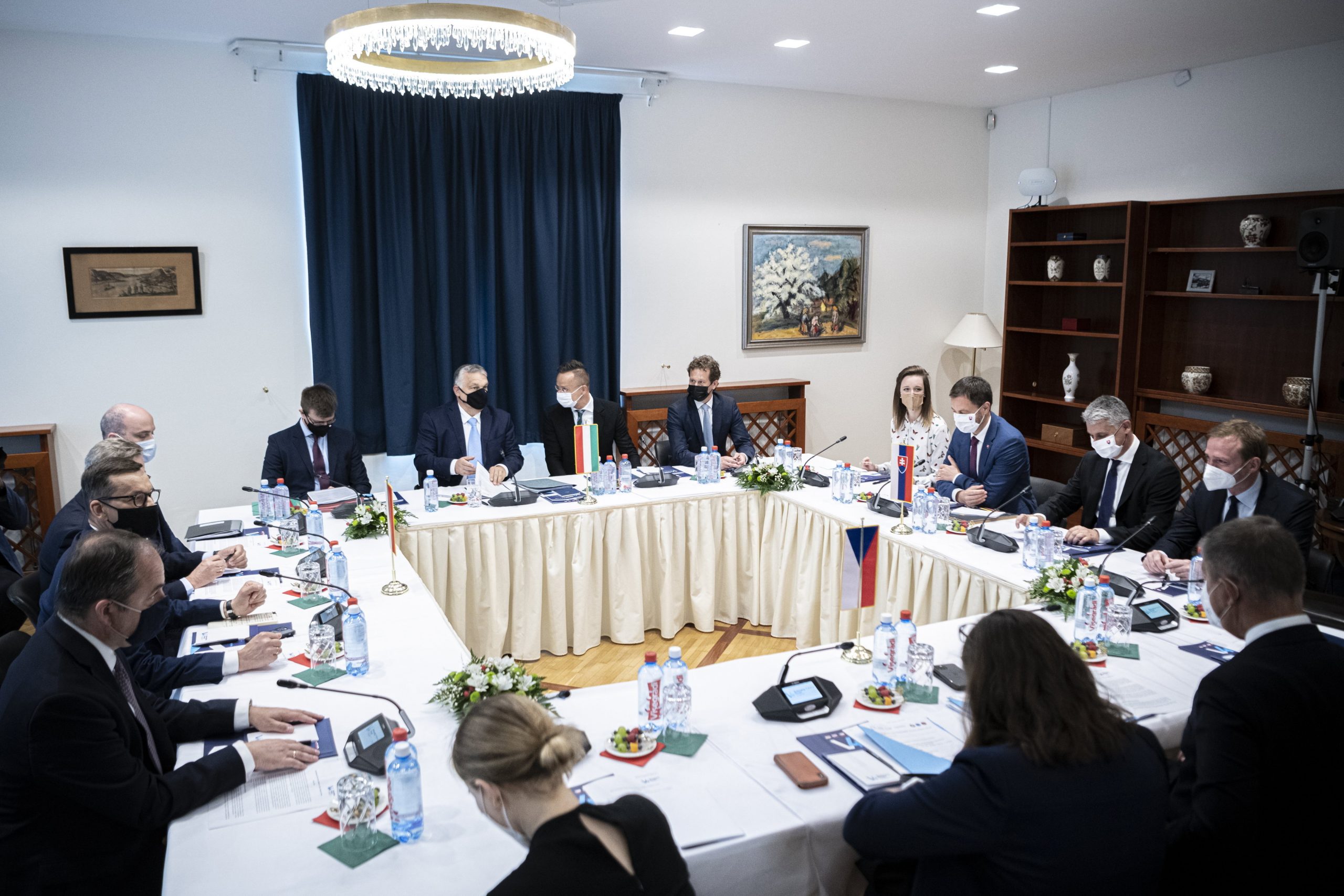 At the first summit of heads of government under the Hungarian V4 Presidency, Prime Ministers of the V4 met in Ljubljana with the Prime Minister of Slovenia that holds the Presidency of the Council of the European Union, to discuss current issues and potential cooperation at the beginning of Hungary’s year-long V4 Presidency and Slovenia’s EU Presidency in the first half of 2021.

The Prime Ministers’ consultations focussed on the priorities of both Presidencies, the conference on the future of Europe, the situation in the Western Balkans and EU enlargement, security and resilience (e.g. in relation to tackling migration), and climate policy, among others.

Before the V4+Slovenia meeting, the V4 Prime Ministers adopted a joint statement in which they agreed to cooperate closely during the 2021/22 Hungarian V4 Presidency in key policy areas like the Conference on the Future of Europe, migration and asylum, climate policy, and EU enlargement. Read the full joint statement here.

At the press conference following the summit, Slovenian Prime minister Janez Janša said that "the positions of the Visegrád Group on the priorities of the Slovenian Presidency largely reflect Slovenia’s positions as well". He highlighted that these shared priorities included recovery and resilience, EU strategic autonomy, EU security and credibility, as well as the European way of life. He then thanked the four Prime Ministers for cooperating even during the pandemic and specifically thanked the Polish and Hungarian Prime Ministers for their help in protecting the external Schengen borders.

Hungarian Prime Minister Viktor Orbán underlined that restarting the economy was the most important priority, which requires investment, security and expanding markets. He emphasized that there would be investments only if taxes are not raised, but reduced. There will be security if the Central European countries continue to represent their joint position on migration, which does not support any mandatory distributional quota. Finally, there is a need to expand markets, which will be possible only if the countries of the Western Balkans are admitted to the EU as soon as possible, thus strengthening the Union. He said that the EU would be facing difficult issues over the next six months – from the climate package to migration – and it was fortunate that it is Slovenia that holds the presidency of the EU Council in this period, led by Mr Janez Janša who has a historical perspective when it comes to assessing European issues. "Hungary will do everything it can in the coming months to support the Slovenian Presidency in making it a success," he said.

Slovakia’s Prime Minister, Eduard Heger underlined that the EU-presidency's priorities were well-balanced and reflected the topics that are currently important in the EU. "We support Slovenia in the implementation of these priorities, including the rule of law", he said. He stressed the need to increase vaccination coverage in Europe, which, along with economic recovery, is in the focus in Slovakia as well. In the debate about the EU’s future, citizens must remain at the heart of the process. He highlighted digitalisation as a great opportunity and also a risk for the EU, and therefore welcomed cooperation between the V4 and Slovenia on cyber security and fighting disinformation. As for the climate package to be presented by the European Commission, Slovakia supports carbon neutrality, but the measures to be taken must prevent energy poverty. Finally, he expressed his full support to the Slovenian EU Presidency, and called for accelerating the accession negotiations with the Western Balkans countries.

Andrej Babiš, Prime Minister of the Czech Republic also stated that achieving a high level of vaccination coverage was crucial. "We must convince our citizens to take the vaccine if we want to return to normality and if we want our children to go to school in autumn," he stated. Mr. Babiš appreciated the priorities of the Hungarian V4 Presidency. He hoped that the resilience and recovery plans for the V4 countries would be approved and that EU funds could be used for rebooting the economy. The Prime Minister emphasised that the Schengen area was the most important topic of the working consultation with Slovenia, which topic is strongly linked to the issues of migration and security, since Europe is threatened by a strong wave of migration from Afghanistan due to the reduced military presence there. He added that the situation in Mali was similar and the military presence there should be strengthened.

The Prime Minister of Poland, Mateusz Morawiecki, started by positively assessing Slovenia’s EU presidency plan, and emphasised the need to rebuild the economy and ensure growth. He stressed that the EU is strategically strong only if its members are strong, and that the voice of Central Europe had to be heard very well in the debate on the future of Europe. Rejecting the centralisation of the EU, he argued for a strong role for sovereign states working together, particularly in economic terms. As for migration, defending the EU’s external borders is key. Asia and sub-Saharan Africa are the two sources of migration, and the reduction of European troops in these areas was not a step in the right direction. Considering a possible fourth wave, international cooperation in effectively fighting the COVID pandemic is crucial. He concluded by expressing that that there was no room in the EU for better or worse categories of member states, and double standards. The Prime Minister expressed hope that Slovenia would be able to focus on real problems such as migration and the pandemic during its presidency.

See Gallery for photos of the summit.