V4 around the world

Home / V4 around the world

Over the years, Visegrad Cooperation has become a globally-known brand, thanks also to joint activities of the embassies and consulates of the V4 countries around the world. The Hungarian Presidency will continue to organise events promoting the V4 both as an attractive touristic and business destination, and as a regional cooperation ready to build partnerships with interested countries. V4 cooperation in cultural diplomacy will also continue, to present the V4 region’s diversity and cultural values worldwide. On July 15, 2021, the presidency of the Visegrad Four was formally handed over in Japan as part of a ceremony at the embassy. At an event attended by the four Visegrad Ambassadors and the V4 Ambassador and Deputy Director General of the Japanese Ministry of Foreign Affairs, both H. E. Hungarian Ambassador Norbert Palanovics and Deputy Director General Kawazu emphasized the need to give new impetus to V4-Japan cooperation. To celebrate the launching of the Hungarian presidency H. E. Consul General Dr. András Izsák in cooperation with the Konrad-Adenauer-Stuftung e.V office in Stuttgart and the Hungarian Cultural Institute of Stuttgart organized a panel discussion. Hungarian V4 Ministerial Commissioner Krisztina Varju took part in the debate along with Rainer Wieland, Vice-President of the European Parliament, and others. H. E. György Habsburg took part in a V4 work breakfast at the residence of the Polish Ambassador, where the invited guest was Clément Beaune, French Secretary of State for EU Affairs. At the meeting, he outlined the priorities of the Hungarian V4 presidency, its EU agenda in particular.

The official opening of the Hungarian V4 Presidency took place in Zagreb with the participation of Zsolt Németh, Hungarian Chairman of the Foreign Affairs Committee of the Parliament, and Foreign Minister Gordan Grlic Radman from Croatia. The regional charge of the event and the symbolism of bilateral relations were raised by the Croatian Foreign Minister's speech given in Hungarian. H.E. Ambassador Tamás Iván Kovács hosted the first V4 brunch at his residence with the highest legislative representatives of the people of Belgium, Ms. Éliane Tilleux, the President of the Chamber of Representatives and Ms. Stephanie D’Hose, the President of the Senate. During the event the priorities and objectives of the current Hungarian V4 Presidency were discussed. H. E. Ambassador Ferenc Bányai held a V4 lunch to celebrate the launching of the Hungarian Presidency. The event was attended by Ilgvars Kļava, Deputy State Secretary for Eastern Europe, Central Asia, the Far East and North America at the Latvian Ministry of Foreign Affairs.

H. E. Ambassador György Habsburg organized the opening event of the Hungarian V4 presidency, together with the Hungarian Institute in Paris, in the form of a cocktail reception with an exhibition. In addition to ambassadors and diplomats from EU Member States, the event was attended by French senators, journalists and representatives of the French Ministry of Foreign Affairs. H. E. Ambassador Tamás Iván Kovács launched the Hungarian Presidency of the Visegrad Group in Luxembourg during a lunch graciously hosted by the Embassy of Austria in Luxembourg, and attended by Olivier Maes, political director at the Ministry of Foreign and European Affairs of Luxembourg. As a result of H. E. Consul General Szillárd Bolla’s initiative, from 2021 the V4 countries of Shanghai welcomed a wandering trophy symbolizing the convergence of Visegrád group. The unique art piece created by Zoltán Viczán was presented to the public on the 2nd of July on the occasion of the newly started Hungarian Visegrád presidency. On the 1st of June H. E. Consul General László Keller took over the Visegrad Group presidency from H. E. Witold Leśniak Polish Ambassador at the Hungarian Cultural Institute of Istanbul. The private ceremony was also attended by Istanbul’ Deputy Provincial Governor as well as its President of the Chamber of Commerce. 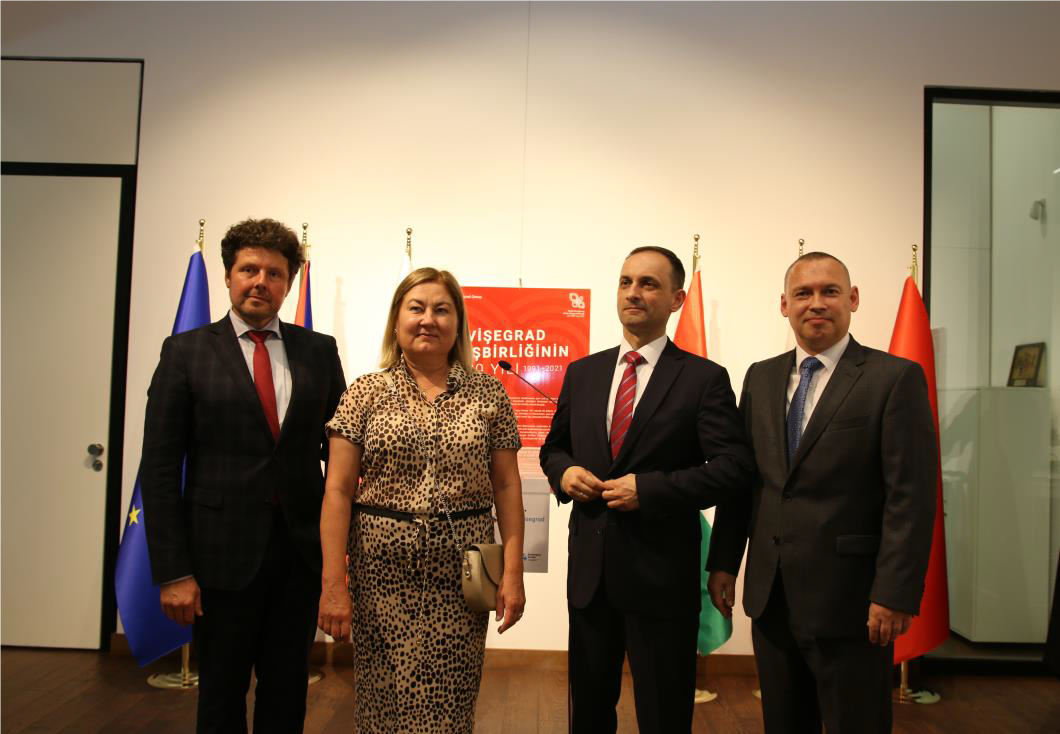 Within the framework of a four day picnic, promoting V4 related art showcasing the Visegrad countries’ culture, H. E. Consul General Tibor Gerencsér took over the presidency of the Visegrad Group by hosting the opening day of the event. H. E. Hungarian Consul General Jenő Csiszár took over the V4 presidency from H. E. Ambassador Adrianna Seinnicka by receiving an engraved copper baton that has been wandering from one Consulate to another over the past four years following the initially Hungarian pattern. H. E. Hungarian Ambassador Levente Benkő took over the presidency of the Visegrád Group from H. E. Polish Ambassador Marek Magierowski on the 1st of June. The event featured a short animated movie premiere followed by a ceremonial reception. Within the framework of a ceremonial dinner, H. E. Consul General Gábor Tordai-Lejkó took over the presidency of the Visegrád Group from H. E. Jan Malkiewicz. The event took place at the Polish Consulate General of Munich. The Cultural Service of the Hungarian Embassy in Brussels, the Hungarian Cultural Institute hosted a wonderful concert and a captivating exhibition opening marking the handover of the V4 Presidencies. Ambassador Támas Iván Kovács took over the Brussels Presidency of the group. The opening event featured a fantastic concert of violin, cello, and piano introducing a truly V4 repertoire: Liszt, Różycki and Dvořák.