Visegrad Bulletin – main events of the Hungarian Presidency in 2021

In the framework of Hungary’s V4 Presidency, governments, state institutions and other organisations of the Visegrad are holding meetings in all cooperation areas, on various levels (heads of state and government, ministers, other high-ranking officials, experts, etc.). Social events and non-governmental initiatives also continue. The Visegrad Bulletin (July 2021 – December 2021) summarises highlighted V4 events and projects, and includes the official calendar of the first half of the Presidency.

Programme of the Hungarian Presidency

Visegrad Cooperation is flexible and informal. Without a centralised institutional framework, activities of the Visegrad Group are coordinated by annually rotating presidencies. The programme of the presidency is prepared by the ministry of foreign affairs in cooperation with other state and government agencies, and then approved by all four Visegrad countries. Download the full programme of the 2021/22 Hungarian V4 Presidency. 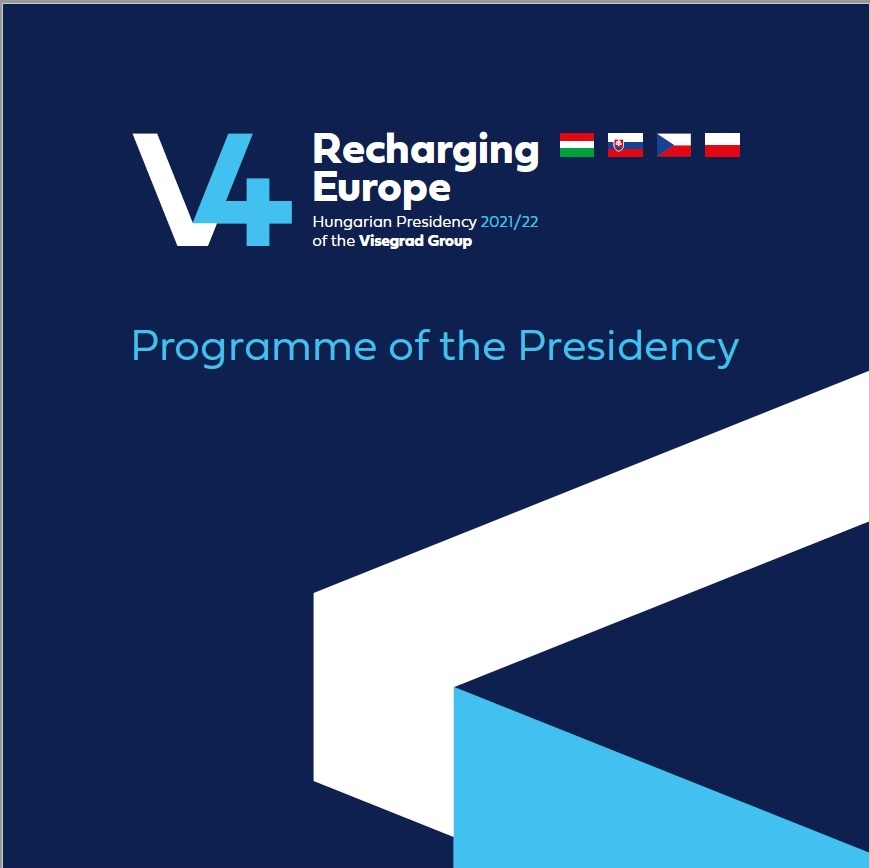 Introduction from the Presidency Programme

Celebrating its 30th anniversary in 2021, Visegrad Cooperation has stood the test of time and continues to provide a successful framework for regional cooperation in Central Europe. The challenges and crises affecting Europe and the world, including the COVID-19 pandemic that has profoundly impacted all aspects of life, further increase the importance of the V4 format. The Visegrad countries have helped each other in different challenges, which demonstrated the strength of regional solidarity and cooperation. Collaboration during the current crisis and the following recovery can be a solid basis for successful cooperation in the next thirty years, to which the V4 countries committed themselves also in the Prime Ministers’ joint declaration issued on 17 February 2021 to celebrate the Visegrad Group’s 30th anniversary.

After the COVID-19 pandemic, it is the shared goal of the Visegrad countries to be among those who benefit from the global economic and political changes. With its population of 64 million, the V4 is an indispensable actor in the post-Brexit European Union. As NATO and EU members, thirty years after the regime changes in Central and Eastern Europe the V4 represents one of the most dynamic regions in the Union, based on high economic growth and employment, rapid digital transformation and robust investment. The Visegrad countries feel responsible for Europe’s future, preserving its values and principles, and supporting the EU’s further enlargement. We are interested in a stable and secure Europe, continuing V4 cooperation in addressing current challenges, e.g. climate change, digital transformation and migration. A Europe founded on the values of respect for human dignity and human rights, fundamental freedoms, democracy, equality and the rule of law, with a thriving civil society and a free media, as well as regional diversity, and the respect for shared values and principles. A Europe that fully utilizes the potential of green economy and digitalisation to remain globally competitive in the 21st century.

The Visegrad countries are ready to cooperate with the parallel Slovenian and French, as well as with the upcoming Czech Presidencies of the Council of the European Union, with the 2021 Hungarian Presidency of the Committee of Ministers of the Council of Europe, and the Polish Chairmanship in the Organization for Security and Cooperation in Europe in 2022.

In these difficult times, the main task of the Visegrad Group and thus of the sixth Hungarian V4 Presidency from 1 July 2021 to 30 June 2022 is to reinforce cooperation so as to contribute to common European solutions and our region’s and Europe’s resilience, security and stability, as well as to post-pandemic economic and social reopening and recovery. At the same time, our main goals include representing the V4’s constructive ideas in the European Union and strengthening V4+ partnerships in the context of a revitalising diplomatic life after the pandemic.

The reopening of the borders enables the citizens of the V4 countries to discover the unique cultural and touristic treasures of the safe and geographically close Central European region, having in mind the restrictions that currently apply to global travel. In support of relaunching the economy, the Presidency will facilitate initiatives in this regard, which also contributes to strengthening people-to-people connections.

Priorities of the Hungarian V4 Presidency: