The Prime Ministers of the Visegrad Group and the President of the Republic of Korea held their second summit meeting on 4 November 2021 in Budapest, organised by the Hungarian V4 Presidency.

The leaders discussed the strengthening of V4+Korea cooperation, in particular in the fields of economy, science and technology, people-to-people contacts, and joint support to countries of the Western Balkans and the Eastern Partnership region via the Visegrad Fund, to which Korea has financially contributed. They also discussed pressing global and regional affairs such as post-COVID developments, climate change, Afghanistan, migration, developments in the V4's neighbourhood and Korea's neighbourhood. 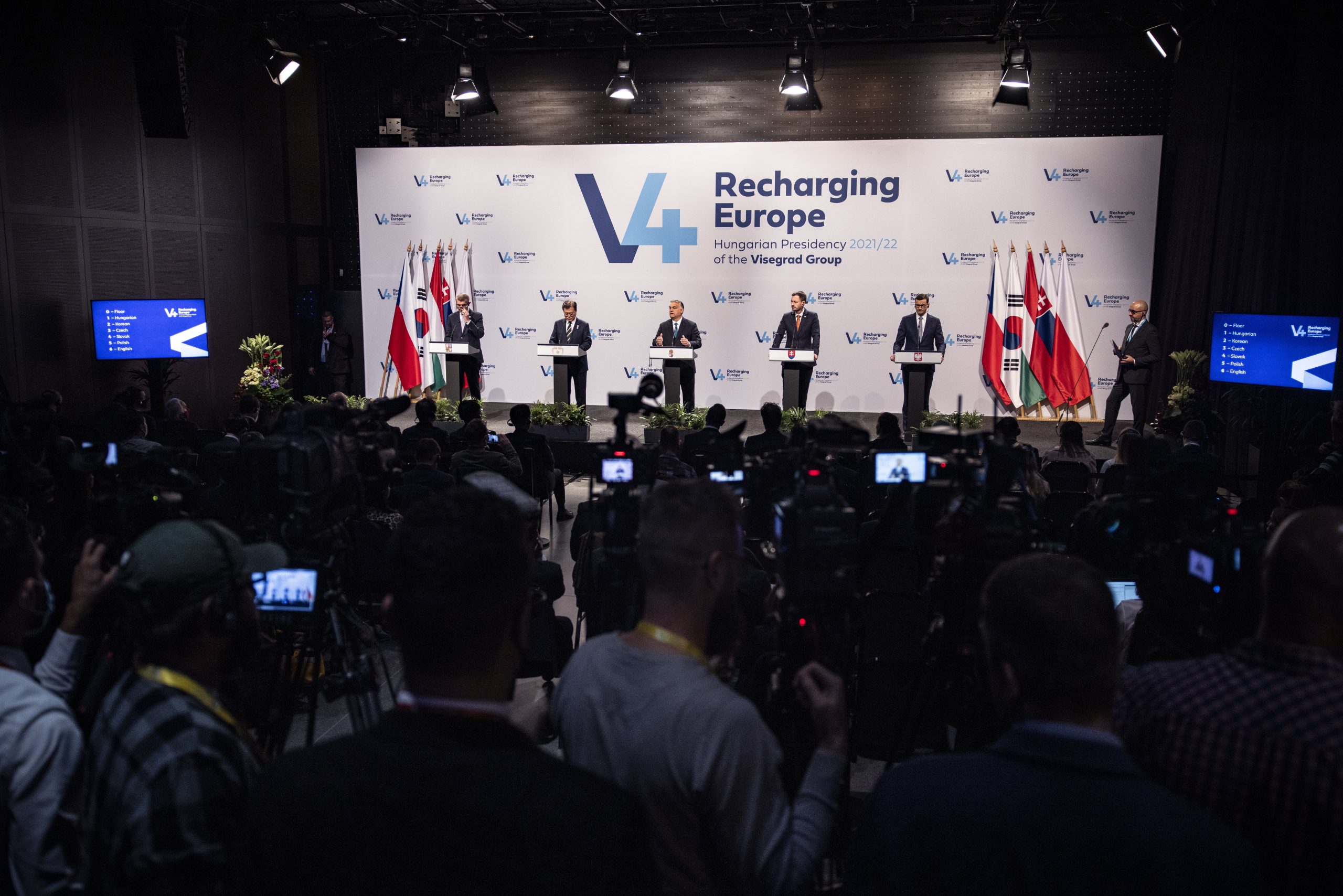 At the press conference following the plenary session, the Hungarian PM said that five success stories had met in Budapest as the Central European economies have had economically prosperous years and have good prospects in the future, while Korea is a world leader in terms of growth and technological development. The Korean GDP is 1.600 billion dollars; and the V4 combined could be a G20 member like Korea, with a total GDP of 1.100 billion dollars. Trade between the Visegrad Group and the Republic of Korea has increased by 40% in the last 5 years, reaching a historic high of $20 billion in 2020. The V4 region is Korea's biggest investment destination in the EU. Viktor Orbán drew the attention of his Korean counterpart to the V4's joint endeavour to develop a High Speed Railway (HSR) network connecting their countries, which is essential for improving the North-South transport infrastructure going through the region. The transcript of the Hungarian Prime Minister's press statement is available here. 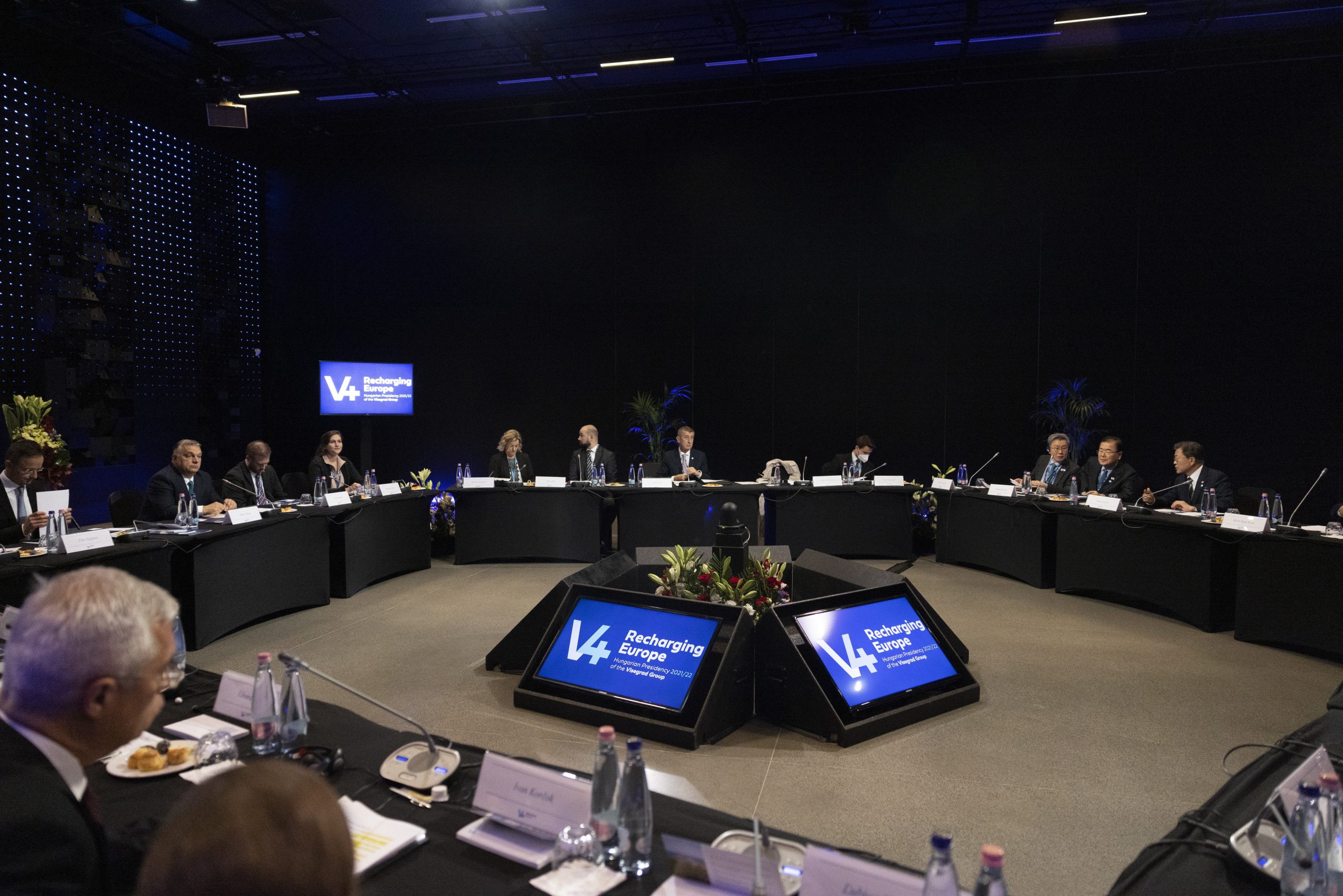 Korean President Moon Jae-in said that peace and harmony define the relations between the V4 and Korea; the Visegrad Group is an important trading partner and investment destination for Korea, with many important Korean companies present in the region. Among the important future areas of V4+Korea cooperation, the President mentioned science and technology, energy, infrastructure, youth and people-to-people contacts.

Slovak Prime Minister Eduard Heger underlined that Slovakia attached great importance to the steel production and Korea ranks as the sixth largest global steel producer, with its industry to GDP ratio even being similar to that of Slovakia (30 percent). Korea also shares with Slovakia a similar national energy mix and a pro-nuclear stance. Heger pointed out that more than 100 Korean companies are active on the Slovak market, with Korea being the fifth largest investor in Slovakia and the largest one from all Asian states, similarly to other V4 countries. He identified electromobility, hydrogen mobility, robotisation, production of batteries and semi-conductors as the main avenues of further potential cooperation.

Polish Prime Minister Mateusz Morawiecki emphasized that the trade exchange with Korea has been growing at an incredible pace in the last few years and is the foundation for long-term economic growth. Morawiecki explained that trade exchange is particularly important to Poland in areas related to innovation, the future of the Polish economy, and the development of automatization and robotization. He praised cooperation with Korea in the areas of electric battery production and the chemical industry.

Czech Prime Minister Andrej Babiš stressed that the Hungarian V4 Presidency is very active, and the organisation of the summit meeting was a very important step. Babiš talked about nuclear energy as the main area of future cooperation and urged South Korea to bid on a project to renew a nuclear power plant in Dukovany, Czech Republic, saying that the East Asian nation has “excellent technology” and that the two countries had already conducted “quite intensive talks.

As the side-event of the summit, the first ever V4+Korea Business Forum was held on 3 November with the participation of Korean and V4 companies focusing green and sustainable energy, e-mobility, digitalisation and the bio-pharma industry.